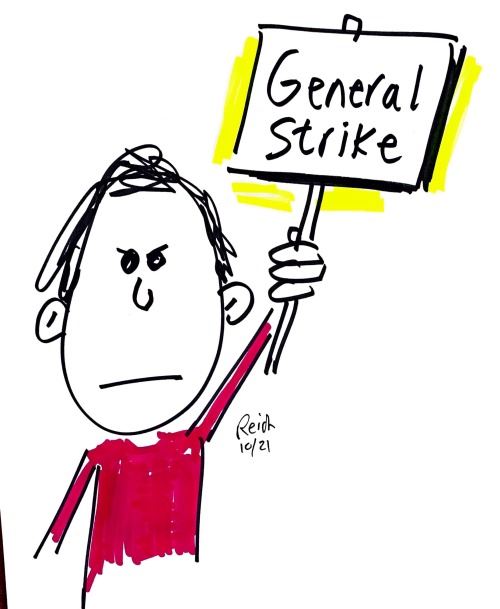 [For more analysis and commentary, please join me at robertreich.substack.com]

On Tuesday, the Labor Department reported that some 4.3 million people had quit their jobs in August. That comes to about 2.9 percent of the workforce – up from the previous record set in April, of about 4 million people quitting.

All told, about 4 million American workers have been leaving their jobs every month since last spring.

Add this to last Friday’s jobs report showing the number of job openings at a record high. The share of people working or actively looking for work (the labor force participation rate) has dropped to 61.6 percent. Participation for people in their prime working years, defined as 25 to 54 years old, is also down. Over the past year, job openings have increased 62 percent.

What’s happening? You might say American workers have declared a national general strike until they get better pay and improved working conditions.

No one calls it a general strike. But in its own disorganized way it’s related to the organized strikes breaking out across the land – Hollywood TV and film crews, John Deere workers, Alabama coal miners, Nabisco workers, Kellogg workers, nurses in California, healthcare workers in Buffalo.

Disorganized or organized, American workers now have bargaining leverage to do better.

After a year and a half of the pandemic, consumers have pent-up demand for all sorts of goods and services. But employers are finding it hard to fill positions.

This general strike has nothing to do with the Republican bogeyman of extra unemployment benefits supposedly discouraging people from working. Reminder: The extra benefits ran out on Labor Day.

Renewed fears of the Delta variant of COVID may play some role. But it can’t be the major factor. With most adults now vaccinated, rates of hospitalizations and deaths are way down.

Childcare is a problem for many workers, to be sure. But lack of affordable childcare has been a problem for decades. It can’t be the reason for the general strike.

I believe that the reluctance of workers to return to or remain in their old jobs is mostly because they’re fed up. Some have retired early. Others have found ways to make ends meet other than remain in jobs they abhor. Many just don’t want to return to backbreaking or boring low-wage shit jobs.

The media and most economists measure the economy’s success by the number of jobs it creates, while ignoring the *quality* of those jobs. That’s a huge oversight.

Years ago, when I was Secretary of Labor, I kept meeting working people all over the country who had full-time work but complained that their jobs paid too little and had few benefits, or were unsafe, or required lengthy or unpredictable hours. Many said their employers treated them badly, harassed them, and did not respect them.

Since then, these complaints have only grown louder, according to polls. For many, the pandemic was the last straw. Workers are burned out, fed up, fried. In the wake of so much hardship, illness and death during the past year, they’re not going to take it anymore.

To lure workers back, employers are raising wages and offering other inducements. Average earnings rose 19 cents an hour in September and are up more than $1 an hour – or 4.6 percent – over the last year.

Corporate America wants to frame this as a “labor shortage.” Wrong. What’s really going on is more accurately described as a living-wage shortage, a hazard pay shortage, a childcare shortage, a paid sick leave shortage, and a health care shortage.Unless *these* shortages are rectified, many Americans won’t return to work anytime soon. I say it’s about time.