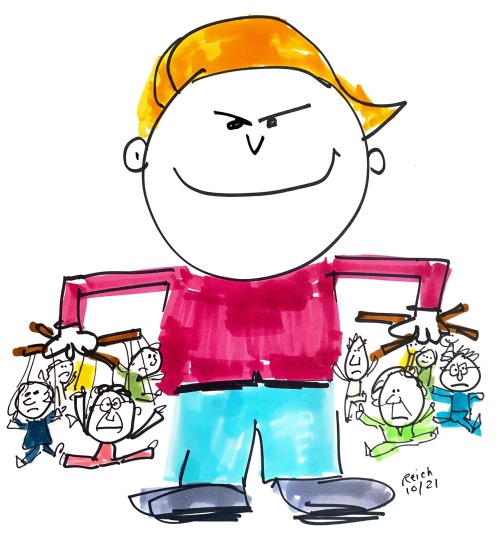 [Please consider subscribing to my substack, at robertreich.substack.com, from which the following is drawn]

The unofficial kickoff of the former guy’s presidential campaign was a rally Saturday night in Des Moines. Unfortunately for the GOP, Trump’s speech focused on his Big Lie that the 2020 election was stolen rather than on Joe Biden, whose approval ratings keep sliding because of the Delta variant’s continuing impact as well as fumbles at the border and in exiting Afghanistan.

What’s surprising is how quickly the rest of the Republican Party is falling prey to this. We’ve already observed it at the state level: Trump’s Big Lie has moved 18 Republican-dominated states to enact 33 laws suppressing the votes of likely Democratic voters, on the false pretext of eliminating “voter fraud” that doesn’t exist. Several of these state laws will also let Republican legislatures ignore future electoral results they dislike. Under the same pretext, Republican states have undertaken bogus “audits” of the 2020 election.

But for a brief time it seemed as if senior Republicans in Washington would try to move the party away from Trump. They now appear to have given up. Several who in January criticized him for provoking the Capitol insurrection are now defending him and minimizing the attempted coup – including, notably, Senator Chuck Grassley, who showed up at Saturday’s Des Moines rally, and former vice president Michael Pence, who is now minimizing and excusing the riot.

For Trump to make the midterm elections into a referendum on himself and his Big Lie is useful for the Democrats. It takes the focus off Biden, reminds Americans how vile the former president is, and forces Republicans to try to defend him. If you watched Fox News Sunday, you might have seen Chris Wallace repeatedly ask House Minority Whip Steve Scalise whether he thought the 2020 election was stolen, and Scalise repeatedly squirm to avoid answering the question.

Scalise also refused to say whether he would vote to hold in contempt of Congress Trump advisers, such as Steve Bannon, who are resisting subpoenas issued by the January 6 Committee. Bannon is invoking executive privilege, at Trump’s request — an absurd position because by the 2020 election Bannon hadn’t worked in the White House for years.

January 6 Committee Chair Bennie Thompson and Vice Chair Liz Cheney say they “will not allow any witness to defy a lawful subpoena or attempt to run out the clock, and we will swiftly consider advancing a criminal contempt of Congress referral.”

This means even more of an ongoing focus on Trump and his attempted coup. Before Congress can refer a criminal contempt to the Justice Department for prosecution, the full House has to vote on it. So you can expect a near party-line vote, which will put Republicans further on record as supporting Trump and, by implication, others who instigated the insurrection.

The criminal contempt of Congress statute, enacted in 1857 and only slightly modified since, provides that any person who willfully fails to comply with a properly issued committee subpoena for testimony or documents is punishable by a substantial fine and imprisonment for up to one year. Once the House votes in favor of criminal contempt, the Speaker is required to report it to the Department of Justice, which then determines whether to prosecute. (Unfortunately, Attorney General Merrick Garland so far has not distinguished himself for holding Trump or his cronies accountable for anything.)

House Republicans could soon find themselves in an even more awkward position as the January 6 Committee investigates the roles several of them played in the insurrection. Senate Judiciary Chair Dick Durbin has asked the committee to investigate the help Rep. Scott Perry gave Trump in pressuring the Justice Department to overturn the election, as well as Rep. Jim Jordan’s contacts with the White House before and during the insurrection. (You may remember that in the 2016 presidential election, Jordan, the top Republican on the House Judiciary Committee, dug into allegations of impropriety at the FBI and Justice Department, and defended the power of the subpoena to compel testimony from executive-branch officials.)

The January 6 Committee also issued a subpoena last week to Ali Alexander, the leader of the pro-Trump “Stop the Steal” organization, who has claimed he worked on the pre-insurrection rally with several GOP lawmakers, including Reps. Paul Gosar, Mo Brooks, and Andy Biggs.

Trump’s speech in Iowa Saturday night suggests we’re already in the gravitational field of the 2024 midterms. But in making that speech mostly about himself, Trump may have given Democrats more leeway to do what Americans – including most Trump supporters – need them to do.