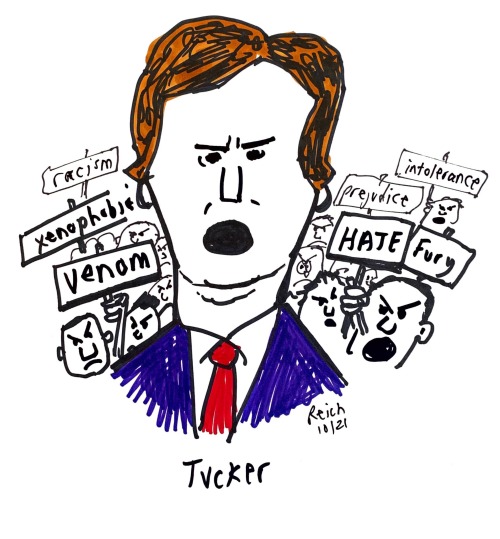 Please subscribe to my newsletter for updates and analysis on power, politics, and the economy sent directly to your inbox.  You can find recent posts at https://robertreich.substack.com.

Call me old-fashioned, but I think people in public life need to be accountable for whatever damage they’re doing to public life. So from time to time I’m going to call out the person I consider to be the worst influential person in American public life.

Tough decision this week, given Kyrsten Sinema and Joe Manchin’s efforts to torpedo Biden’s (and America’s) one shot at reversing widening inequality and combatting climate change, but this week’s winner isn’t either of them. He’s not even a politician. He’s the most popular talking head on Fox News, with 3 million viewers — and the most dangerous demagogue since Donald Trump. His name: Tucker Carlson.

He gets the prize because he recently played a 2015 clip of then-Vice President Joe Biden discussing America’s long history of benefiting from immigration. Then Carlson looked straight at the camera and said the reason Biden was in favor of immigration was “to change the racial mix of the country.”

Carlson continued: “That’s the reason, to reduce the political power of people whose ancestors lived here, and dramatically increase the proportion of Americans newly arrived from the Third World.” And then added: “It’s horrifying. But there’s a reason Biden said it. In political terms, this policy is called the great replacement, the replacement of legacy Americans with more obedient people from far-away countries.”

Carlson has spewed this “great replacement” excrement before, but it’s particularly absurd now because the Biden administration is doing just the opposite – to my horror. It just deported thousands of Haitian refugees desperate to escape Haiti’s deathly chaos. (Oh, and the Obama administration set a record for deportations.)

A liberal “great replacement” conspiracy? Horse manure. If there’s any conspiracy it involves right-wing hate-mongers like Carlson – who are intent on sowing more anger and division in an America still reeling from four years of Trump.

My great grandparents came to this land from Russia and eastern Europe, mainly because their lives were endangered. They and other waves of immigrants have made America into what it is today, both the good and the bad. They didn’t “replace” anyone.

The only people entitled to complain about a “great replacement” are native Americans.

Tucker knows this but he doesn’t care. He’s just an opportunistic cynic who wants to drive up his ratings by feeding white resentment. For that, he’s this week’s worst influential American.

What do you think?  Tell me in the comments at https://robertreich.substack.com/p/this-weeks-worst-influential-american/comments.