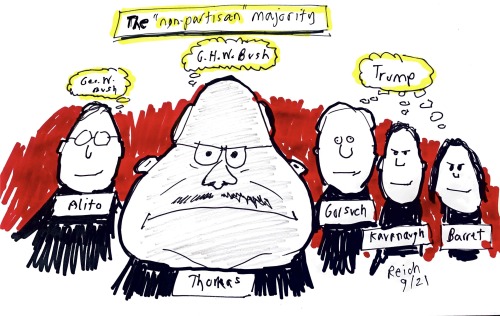 When I was at law school with Clarence Thomas

Sign up at https://robertreich.substack.com/ for more articles and drawings, delivered straight to your inbox.

Just one year after Ruth Bader Ginsburg died, Republican nominees on the Supreme Court are on the way to overturning Roe v. Wade. But they’re going out of their way to speak out publicly against the partisanship they’re actively engaged in.

Last week, Clarence Thomas told a crowd of more than 800 students and faculty at Notre Dame that the Court shouldn’t be viewed in partisan terms, and that justices don’t base their rulings on “personal preferences.” But if not personal preferences, where exactly do they discover the law? Thomas never said. When asked whether the attorneys presenting oral arguments ever compel him to change his mind, Thomas said, “almost never.”

The previous week, the court’s newest member, Justice Amy Coney Barrett, told a crowd in Kentucky that Supreme Court justices are not a “bunch of partisan hacks.”

Methinks they doth protest too much.

If there’s any doubt about the partisan hackery of the Supreme Court’s six Republican appointees, it will be on full display in the Court’s next session when they overturn Roe in the case they’ve already teed up to do the dirty deed: Dobbs vs. Jackson Women’s Health Organization, about Mississippi’s law that bans almost all abortions after the 15th week. It’s scheduled to be argued December 1.

Flashback: I was in law school in 1973 when the Supreme Court decided Roe, protecting a pregnant person’s right to privacy under the 14th amendment to the Constitution. Also in my class at the time was Clarence Thomas, along with Hillary Rodham (later Hillary Clinton) and Bill Clinton.

The professors used what you probably know as the “Socratic method” – asking hard questions about the cases they were discussing and waiting for students to raise their hands in response, and then criticizing the responses. It was a hair-raising but effective way to learn the law.

One of the principles guiding those discussions is called stare decisis — Latin for “to stand by things decided.” It’s the doctrine of judicial precedent. If a court has already ruled on an issue (say, on reproductive rights), future courts should decide similar cases the same way.

Supreme Courts can change their minds and rule differently than they did before, but they need good reasons to do so, and it helps if their opinion is unanimous or nearly so. Otherwise, their rulings appear (and are) arbitrary — even, shall we say? — partisan.

In those classroom discussions almost fifty years ago, Hillary’s hand was always first in the air. When she was called upon, she gave perfect answers – whole paragraphs, precisely phrased. She distinguished one case from another, using precedents and stare decisis to guide her thinking. I was awed.

My hand was in the air about half the time, and when called on, my answers were meh.

Clarence’s hand was never in the air. I don’t recall him saying anything, ever.

Bill was never in class.

Only one of us now sits on the Supreme Court. By all accounts, he and four of his colleagues — all appointed by Republican presidents, three by a president who instigated a coup against the United States — are getting ready to violate stare decisis, judicial precedent.

I don’t expect them to give a clear and convincing argument for why. Do you?