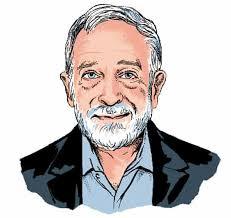 Why I Remain Hopeful

A bit over a month ago, I began a newsletter with the goal of starting a different kind of conversation with people who wanted to go beyond the headlines, to connect the dots between various political and economic phenomena, and to have a thoughtful, ongoing dialogue about where we’re headed as a society.

I have been overwhelmed by the responses – the enthusiasm, and the level of engagement and respect people are bringing to this community dialogue. (Some of you have even kindly said you like my daily drawings.)

I was delighted to learn that one reader named Herbert voted for my favorite leftie vice president, Henry Wallace, in 1948. (By my math, Herbert must be 94 and is still on top of politics!) Another reader, Robin, asked a provocative question about whether oral arguments before the Supreme Court really do change minds. And Kathy reminded us all of the importance of dignity and respect at work. I could go on and on.

With all the news coming out of Washington DC, I’ve been sharing my take on the week ahead every Monday morning. Most Americans are utterly confused or misinformed about what’s at stake in the ongoing negotiations of Biden’s Build Back Better Agenda and what’s happening behind the scenes, so I’ve tried to provide clear analysis by outlining the issues, the players, and their motives (and you can bet that I took a close look at Joe Manchin and Kyrsten Sinema — and their big money backers that seem to be calling the shots.)

Frankly, I’ve been disappointed with the job the mainstream media has done reporting on Biden’s initiatives, so I’ve been working to fill in the gaps and give more context to the news.  For example, the media completely misinterpreted the latest jobs report. The coverage was almost universally gloomy, emphasizing “weak” growth and the number of unfilled jobs. But the real story is not bad news, it’s good news! For the first time in decades, American workers are standing up and demanding better wages and improved working conditions. In the wake of so much hardship, illness and death during the past year, I think many peoples’ priorities have shifted. I’ve called it an unofficial general strike.

And then sometimes I share personal memories, like the time I went on a date with Hillary (then) Rodham or when I went to law school with Clarence Thomas, Bill Clinton, and Hillary.

I’d like to add: Sometimes when I write pieces about corruption, our rigged system, corporate hypocrisy, or money in politics, I worry that pointing these out will make people even more cynical than they already are about American politics, resulting in a kind of fatalism or resignation that causes many to give up — and thereby cede the entirety of our democracy to the moneyed interests.

But my hope is that when people hear about this sort of thing, they’re outraged enough to become even more politically active. (One reader, however, did ask me what keeps me optimistic about the future. For me, it’s a no-brainer: my students, who are among the most diverse, intelligent, and committed I’ve ever taught.)

Many have shared that they’re feeling isolated – physically, politically, or otherwise. So my hope is that this newsletter becomes a space where we can re-ignite our optimism, gain solace from the views and experiences of others, ask the hard questions, and get beyond frustration or isolation. We are building a community committed to learning, with an ongoing conversation between you and me and among one another.

For those who’ve yet to sign up, please consider joining us.