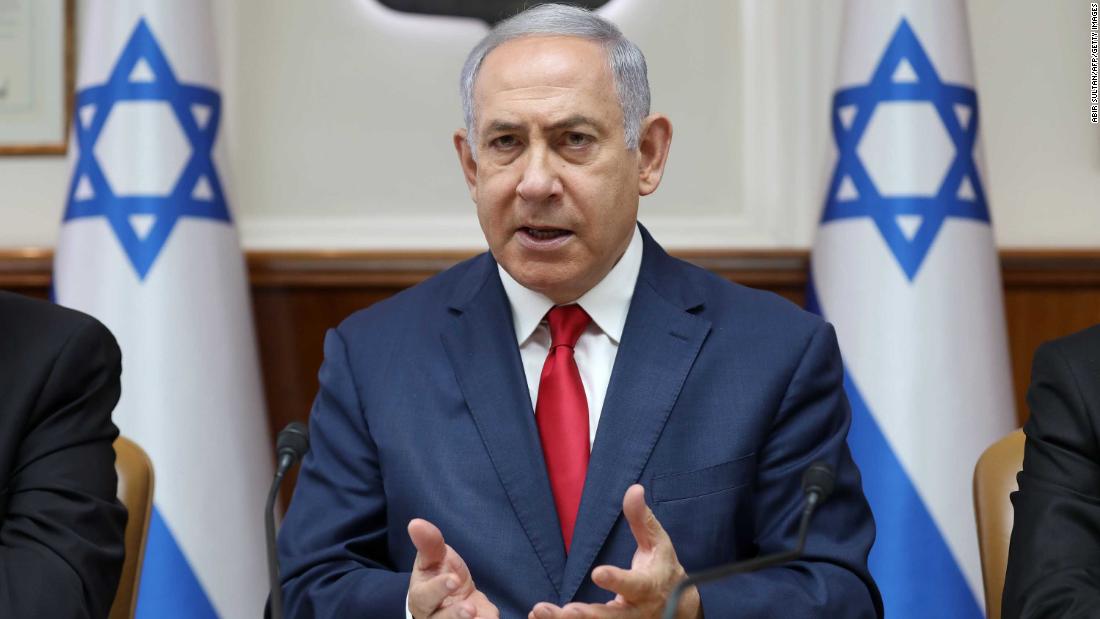 Netanyahu told reporters at a press conference that, if re-elected and able to form a coalition, he would apply Israeli sovereignty over the Jordan Valley and the northern Dead Sea.
He said he expected US President Donald Trump to present his Middle East peace plan just days after Israelis vote next Tuesday, September 17, and that in co-ordination with the US, he would also look to apply sovereignty over all Israeli settlements in the West Bank.
“[The US plan] poses a great challenge for us and a great opportunity, a historic opportunity to apply sovereignty over settlements in the West Bank and other areas of importance to our heritage,” Netanyahu said.
A US administration official told CNN: “There is no change in United States policy at this time. We will release our Vision for Peace after the Israeli election and work to determine the best path forward to bring long sought security, opportunity and stability to the region.” The US was informed about the announcement beforehand, the official said.
But the US also offered tacit approval of Netanyahu’s announcement, saying it would not get in the way of an eventual peace settlement.
Netanyahu has long preached that the Jordan Valley is critical to Israel’s security, and he has taken American politicians to visit the region.

If carried out, Netanyahu’s plan would be a major blow — possibly a fatal one — to efforts to reach a negotiated two-state solution between Israelis and Palestinians. In one swoop, it would remove part of the land that Palestinians, with support from the international community, regard as the site of a future Palestinian state.
UN Secretary-General Antonio Guterres said the plan would be “devastating” to prospects for peace.
“Unilateral actions are not helpful to the peace process,” said Guterres in a statement Tuesday. “Any Israeli decision to impose its laws, jurisdiction and administration in the occupied West Bank is without international legal effect.”
Ayman Odeh, who represents Arab citizens of Israel in the Knesset, condemned Netanyahu’s announcement as a declaration that Israel is “effectively an apartheid state.”
In a statement, the leader of the Joint Arab List, the alliance of parties representing Arab Israeli citizens in next week’s elections, said: “Netanyahu is systematically closing the historical files, he is liquidating the Palestinian issue and eliminating the possibility of a peaceful two-state solution, that is, the possibility of peace. [This is] the implementation of the American deal of the century, and the official declaration that Israel is effectively an apartheid state.”
For other Israeli political parties, the announcement presented a challenge, as shown by the response from the main opposition party, Blue and White, led by former Army Chief of Staff Benny Gantz.
In a statement, the party said it had always been in favor of applying sovereignty over the Jordan Valley but criticized how the Prime Minister made the announcement.
“The residents of the Jordan Valley do not feature in Netanyahu’s propaganda,” the party said. “Blue and White have made clear that the Jordan Valley is a part of Israel forever.”
“Netanyahu drafted a plan to cede the Jordan Valley in 2014,” it added. “We are happy that Netanyahu has come around to adopt the Blue and White plan to recognize the Jordan Valley.”
Meanwhile, Netanyahu’s critics on the Israeli right said the announcement was an empty promise, calling on him to annex the Jordan Valley immediately.
The West Bank was captured from Jordan by Israel in the Six Day War in 1967. It has been regarded for decades as Palestinian territory, and most of the international community regards it as being under Israeli occupation, with all settlements built there considered illegal, though Israel disputes these characterizations.
The Jordan Valley makes up the eastern-most part of the territory and lies below sea-level in a long, deep valley created by the Jordan River.
Israeli leaders view it as strategically significant since it controls the border with neighboring Jordan. Despite a durable peace agreement signed between the two countries in 1994, many Israeli officials still see the territory as crucial to Israel’s security needs.
By contrast, most of the Israeli settlements in the West Bank lie on higher ground in the western part of the territory, often in close proximity to Palestinian cities and towns.
Netanyahu has promised to annex parts of the West Bank before, even saying earlier this month that he would apply Jewish sovereignty to all of the Jewish communities in the territory.
What makes this announcement different is the specifics Netanyahu offered, even laying out a map of areas he intends to annex. Previous mentions of annexation have been couched in generalities and provided scant details.
In his Tuesday announcement, Netanyahu said he would not annex a single Palestinian into Israel, even showing access routes on his map which he said would give Palestinians freedom of movement.
But senior Palestine Liberation Organization official Hanan Ashrawi said Netanyahu was following an “ethnic cleansing agenda” and said the international community had to avoid complacency if it wanted to prevent what she termed “perpetual conflict” in the region.